My personas and scenarios provided the framework for mapping out my user flows and wireframes. 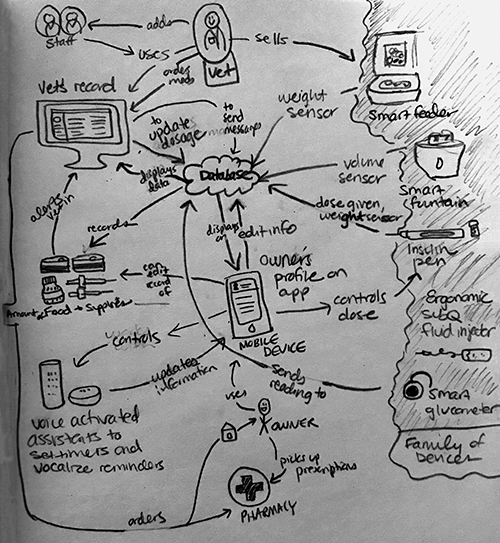 As I thought more about specific interactions with the system, I had to also consider how the larger system would operate. Sketching out a high level concept map helped me determine how the system would respond to the user. It also helped me imagine what some of the other functions could be, such as viewing the patient medical record and scheduling appointments. Although these functions were out of scope for this project, they were important enough to include as non-clickable elements in both vet and owner interfaces.

Although there are many connected devices for measuring blood glucose in humans, there are currently none for animal diabetes. And unlike humans, pets cannot live with an insulin pump. Owners of diabetic animals that take regular blood glucose tests have a myriad of supplies to refill, and the sequence of the tests, meals, and insulin injections can be challenging to coordinate.

In my research I also discovered that Apple is developing a needleless blood glucose monitor for their earbuds, and the FDA just approved a monitor that does not require a skin prick. Although neither of these technologies are currently available for consumers, I included a smart, potentially needleless, glucometer in my system. Including the device allowed me to consider what an an automatic system response to syncing with a physical device might look like.

Creating rough flows in Google draw helped me visualize the full interaction in a single image. 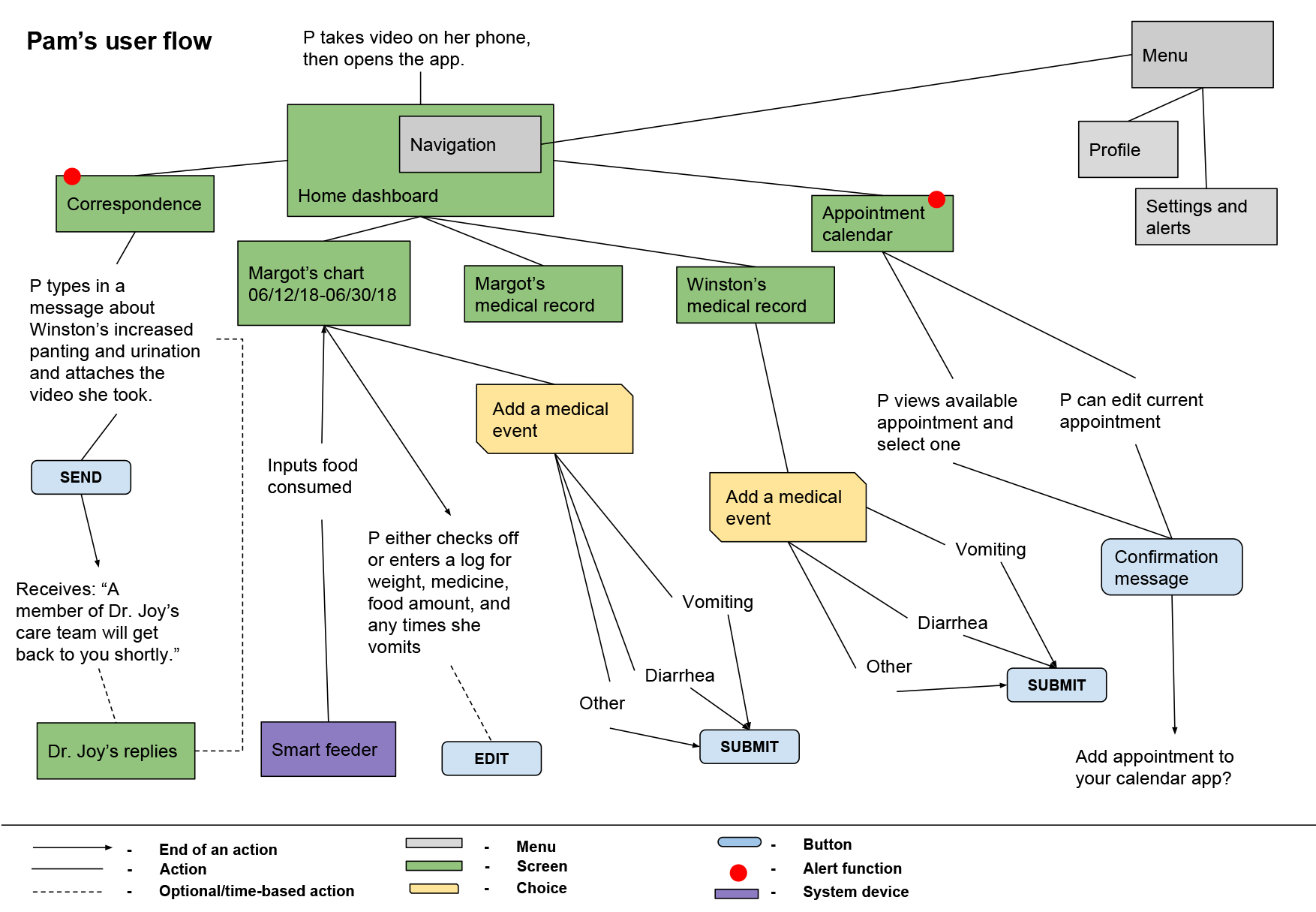 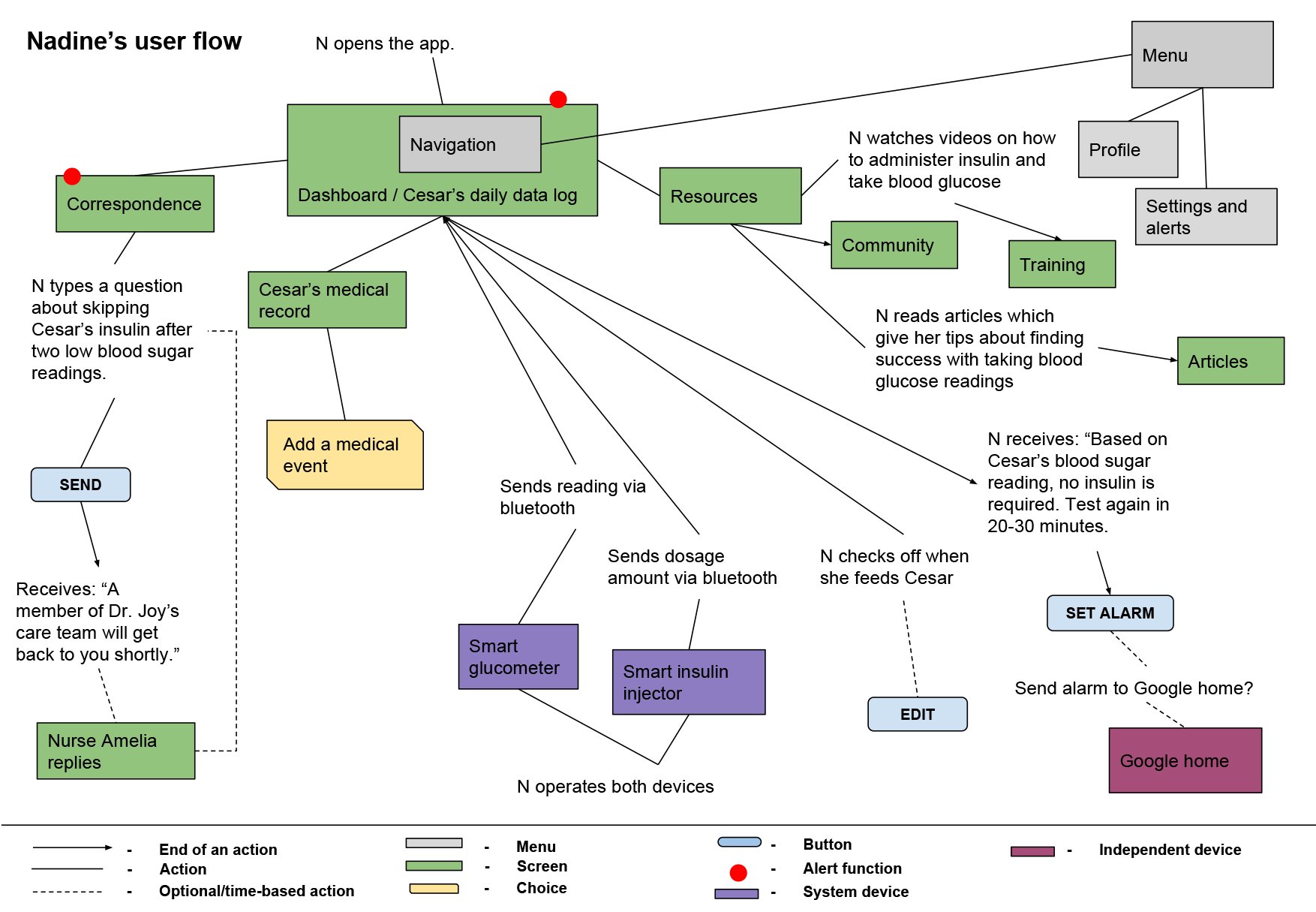 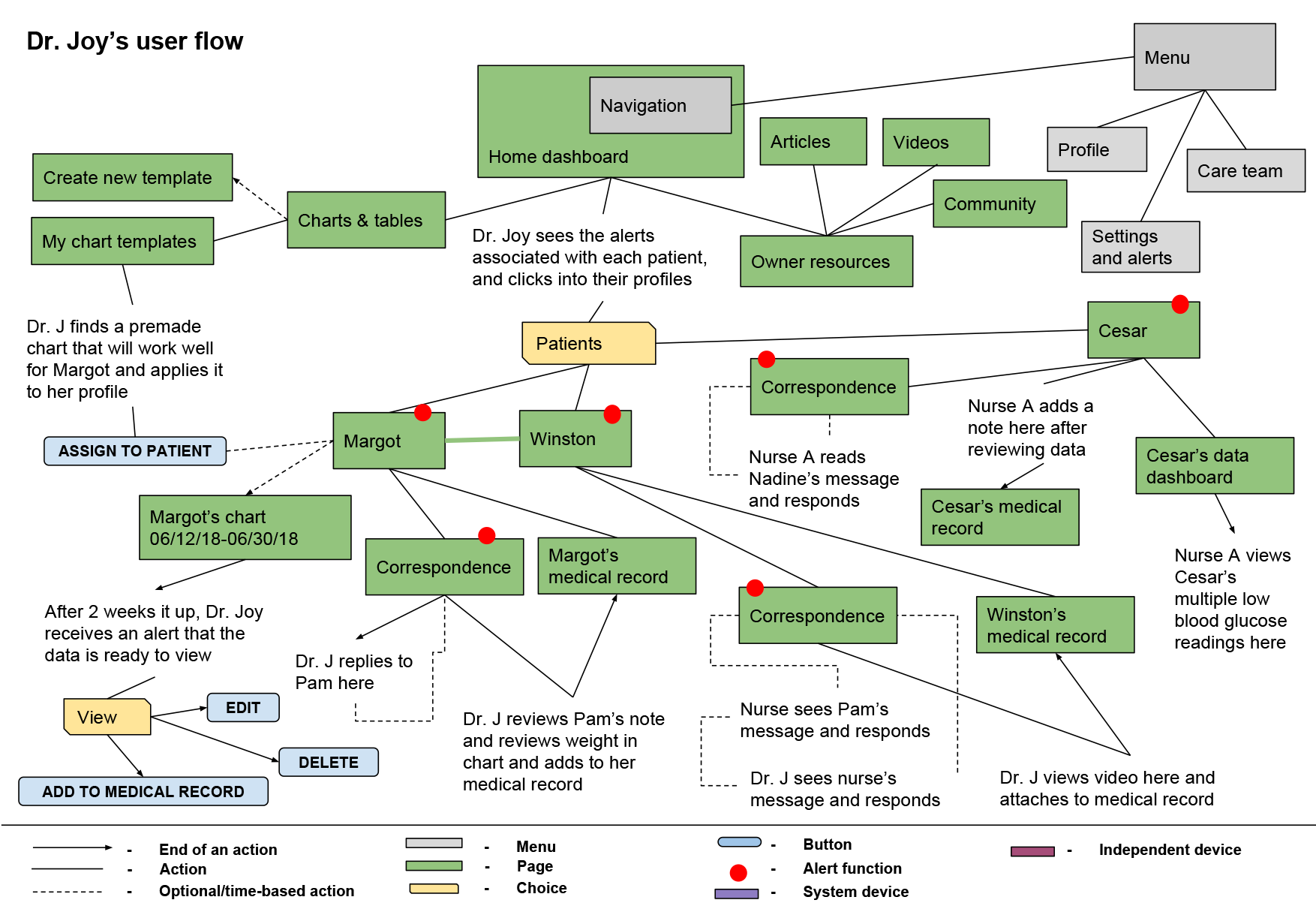 I completed concept testing of the owner and veterinarian flows using low fidelity wireframes made with UXPin. Testing at this stage gave me valuable feedback on my flows before refining the wireframes further.

Here I demoed a wheel interface with segments representing daily tasks. Testers mostly responded positively to this concept, noting that it was both easy to understand and satisfying to complete. One tester was concerned that the wheel did not account for a multitude of tasks, and may not be intuitive to some people. Based on this feedback I decided to create button on the owner dashboard to toggle between a list view and a wheel view to account for both concerns.

I tested five out of the six participants remotely using Zoom. The last participant I tested in person. My users were made up of a mixture of vets and pet owners of cats and dogs with chronic conditions. Five of the six had participated in the user research and one was new to the project.

I acted as moderator, note-taker, and scheduler for these testing sessions. I recorded video of the session so that I could listen back to them and transcribe relevant quotes from participants. I shared a digital prototype that was comprised of black and white, semi-clickable wireframes with each participant. I read a scenario aloud and either asked them to complete tasks, or to give me a verbal response to the screens presented before them.

Target user type 1: experts (veterinarians, nurses, vet technicians)
Scenario: One of your newest patients, Nadine, has a dog, Cesar, who was recently diagnosed with diabetes mellitus. Nadine is very dedicated to Cesar, but was worried about the high cost of care. You suggested that she try to take blood glucose readings at home, rather than at the hospital, to help cut down on cost and help familiarize herself with the treatment. You monitor her progress using this interface.

Verbal Response: Where might you expect to find information about her progress?

Task 2: Describe how you would follow up with Nadine to ask about her progress.

Verbal Response: Was this information easy to find? If so, why? Where did you expect it to be? What is missing?

Scenario: Pam, owner of your patient, Margot, is struggling with her cat’s, IBD. Although Pam says she’s been giving Margot her medication twice a day, she reports Margot vomiting and losing weight. You want to set up some data for her to track carefully so you can get a bigger picture as to what’s causing Margot trouble.

Target user type 2: new users (pet owners and their families)
Scenario: Now, imagine that you are Nadine instead of Dr. Schneider. Your vet has set you up with a daily list of to-do items for Cesar’s care. You wake up, open up the app on your iPhone and see this screen.

Verbal Response: What are your first impressions about this screen? What do you see before you?

Task 4: Go through the process of taking Cesar blood glucose, administering insulin, feeding him breakfast, and recording these actions in the app before you head out for work at 8:00AM.

Scenario: Now, imagine that you are Pam instead of Nadine. Your vet has set you up with a daily list of to-do items for your cat, Margot’s care. Dr. Schneider wants you to log Margot’s meds, monitor her eating, and log her weight and any times she vomits.

Verbal Response: If you wanted to see how much Margot has eaten over time, where would you expect that information to be?

I completed usability testing of the owner flows using high fidelity wireframes made with Sketch and inVision.

Similar to my first round of concept testing, I moderated four out of the five sessions remotely using Zoom. I recorded audio and video of the users’ screens and faces while performing the tests. Each user loaded the InVision prototype onto their phone for the session. In the fifth testing session I conducted the testing in-person using my own phone.

The testers completed 6-8 tasks, depending on their availability and the length of each task. The tasks related to tracking data, communicating with the vet, adding resources, and responding during emergency situations.

Pam and Margot flows
Scenario: You have a 13-year-old cat named-Margot who was recently diagnosed with early stage chronic kidney disease. During her annual check-up Dr. Schneider noticed that Margot had lost some weight, and you mentioned that she’s been vomiting more frequently. Dr.Schneider performed a few tests and determined that she likely had inflammatory bowel disease. Knowing that you are a nurse who is interested in Margot’s medical health, Dr.Schneider recommended that you try out the PetApp to help track Margot’s symptoms and communicate information to her electronically.

After a few months of using the app to log Margot’s weight, her vomiting, and take notes, you begin to notice that Margot’s losing weight and vomiting more frequently again.

Task 1: Using the app, write a note expressing your concern. Add Dr. Schneider to the note, and attach her weight log.

Scenario: The next morning you see a notification that you have a reply to your note.

Verbal Response: How was the experience? Did it happen as you expected it? What surprised you?

Scenario: Dr. Schneider isn’t overly concerned about Margot’s weight loss based on the data you shared with her. She has suggested that you use the PetApp to keep a detailed record of Margot’s symptoms over the next two weeks before you’re scheduled to come in for a follow up appointment. Dr. Schneider has set up a routine for you to complete every day and record using the app. She would like you to keep track of Margot’s medication, log any times she vomits, and record her weight a couple of times each week.

Scenario: After Margot finishes dinner you see that she has vomited up some of her food.

Task 4: Record one instance of vomit.

Nadine and Cesar flows
Scenario: When you took your dog, Cesar, in for his annual visit, you were shocked to discover that he had diabetes mellitus. When Dr. Schneider explained the required treatment plan for Cesar, you felt extremely overwhelmed and distracted. You ultimately agreed to take regular blood glucose readings and curves at home to help cut down on the cost of care as well as use the PetApp to support you throughout the adjustment process.

Every day you will take Cesar’s blood glucose reading before mealtime to ensure it’s within a safe range. You will feed him, recording whether he eats most, or half of his meal. Finally, you will administer a dose of insulin, the size of which is based on whether or not he finished his meal.

When Dr. Schneider showed you how to inject Cesar with insulin in the scruff of his back, you filmed the process on your phone to reference at home.

Task 5: Open Cesar’s PetApp profile and add the video you shot at the hospital to your resources page for later reference.

Task 6: Using your smart glucometer, record Cesar’s blood glucose, feed him, and administer his insulin using the app. Complete this sequence as if over the course of one day.

Task 7: Complete the sequence again based on the prompts you see on the screen, but imagine that today you’re running very late for work.

Scenario: You don’t have time to take Cesar’s blood glucose again before you must leave. You determine that the best action is to skip the insulin since his blood glucose is on the low end. At the end of the day you rush home to check on Cesar. He seems eager to go outside, but otherwise normal.

Task 8: Complete the evening sequence based on the prompts you see on the screen.

Verbal Response: What was your impression of this emergency situation? Did you get the information that you needed and wanted?

I received helpful feedback on my usability tests that informed many changes, both small and large, in my final deliverables. Below I have noted some of the biggest changes I made.

Margot's pill interface: Most of my users were confused by the wheel interface when it housed pills.

The combination of the wheel only having two segments and thus looking like a large pill itself, and each of the medications within the wheel not looking enough like pills, was confusing. Cesar’s diabetes task wheel was not a problem, as more segments made the wheel appear more like a clock, and iconography was more straightforward.

In the final prototype I made the default view a list view, noting that if there are less than 3 tasks, or more than 8 tasks, the dashboard defaults to the list view. I also made the pills more three-dimensional. 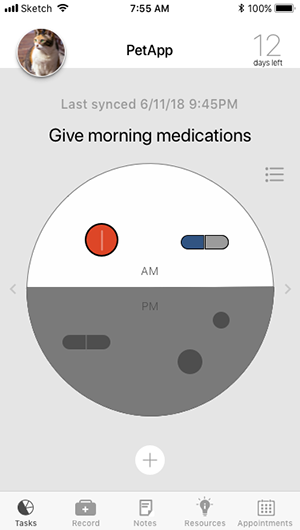 Emergency event alerts: In the initial prototype the emergency and the late flows were combined. Users felt responsible for their pet's emergency becauuse they woke up late. Others felt that the app tattled on them to the vet when it sent an automatic alert.

In the final prototype I improved this by breaking up the flow into two separate flows. I also gave the user the opportunity to write a note to send to the vet when a high risk situation occurs. 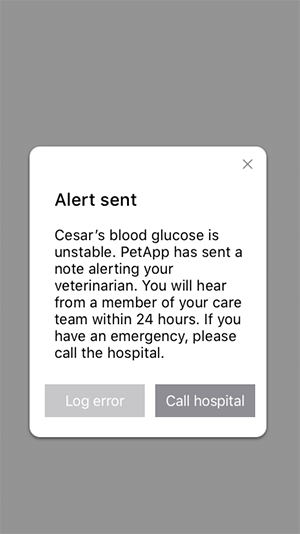 Medical record button: In a few of the sessions users read “record” as a verb and not a noun, thinking that they could add information by tapping on the record button in the tab menu.

In the final prototypes I replaced "record" with "Med Record" to clarify its purpose. 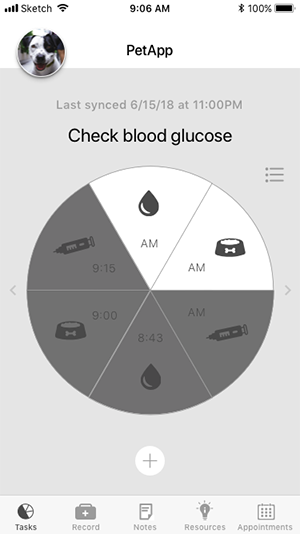 Click through the prototypes and view the final deliverables